Our exhibition in the Municipal Hall of Benken lasted from Wednesday, 23rd to Wednesday, 30th of August. With the panels on the former federal camps with archive documents, the photo exhibition by Pan, the two frames with original documents by Mafeking and Lord and Lady B-P, the postcards of the Pathiheimen and the nine philatelic collections of our association members, they were mainly aimed at visitors from the camp. At the EuroScout from 25 to 27 July 2008, thirty different collections of our foreign collectors' friends, some of them of the highest calibre and prize-winning quality, were on display in the hall of the Rössli Restaurant. The literature provided a good overview of the association's journals, publications and catalogues from Germany and abroad. The climax was certainly the two frames of Walter Grob about the Siamese editions and the rocket mail. 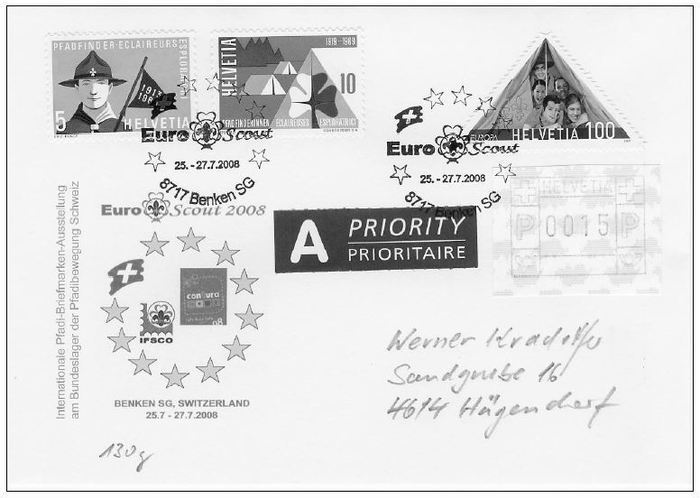 Official special cover, postage paid for postage with the three Swiss Pfadi stamps Fr. 1.30
for a letter A Mail over 100g, cancelled with the special postmark of EuroScout.

At the opening ceremony on 25 July, Willi Haag (Constitutional Councillor of the Government of St. Gallen), Roland Tremp (Municipal President of Benken) and our collector friend Horst Ziegler (President IFSCO) gave speeches; Werner Kradolfer (OK-President) led the programme. Afterwards, the aperitif was enjoyed in the shade of the secluded trees next to the village house.

During the entire opening hours of the exhibition at EuroScout, Swiss Post was present in the municipal hall with its special post office and special postmark. There, receipts could be stamped or shipments with the special postmark to Germany and abroad, including registered mail, could be posted. For the EuroScout, our association has issued the official special envelope and a postal stationary postcard with additional printing. Swiss Post has also used the special envelope for supplying its stamp subscribers. 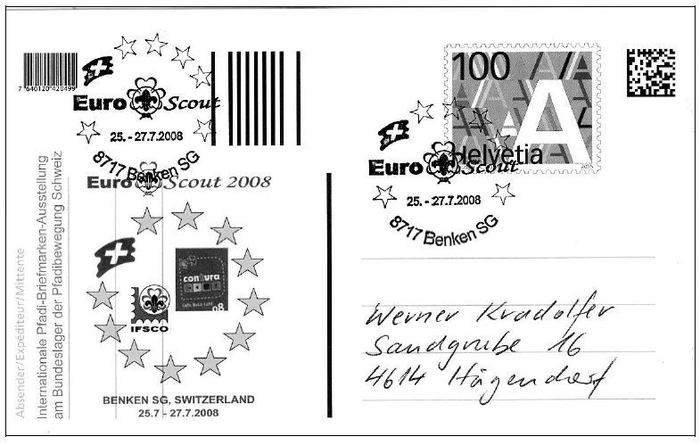 On Saturday, July 26th, Marc Weller, the designer of the triangular path mark from 2007, paid us a visit to the exhibition and an autograph session. Everyone could hand him his documents to sign.

At the sales stall of our association, besides various covers, the official embroidered fabric badge and the EuroScout scarf, the official camp tie of the federal camp embroidered with the logo of the fabric badge, were to be bought. A competition with questions about the exhibition was held for young collectors. Every participant was awarded with a prize. Adolescents were also able to choose from the many documents and stamps made available by the association's youth commission and take them home with them. This was used a lot.

The meeting of delegates of the IFSCO (International Federation of Scout and Guide Stamp Collecting Organizations) took place on Saturday, 26 July at 10 a. m. at Restaurant Rössli, under the direction of outgoing President Horst Zieler (A). Randall S. Frank (U. S. A.) and Luis Martinez de Salinas (Spain) were elected as the new IFSCO President. The new secretary is Hallvard Slettebø (Norway) instead of our board member Alfred Scherb. In 2010 the EuroScout will be organised by our English collectors. It will take place from 14 to 16 May in Chelmsford in Essex, England. Chelmsford was a guest of the 21st Centenary World Scout Jamborees.

The Assembly approved the application from France for the EuroScout 2012, provided that this is achieved. As an alternative, the ArGe Scout from Germany has made itself available for the organization. 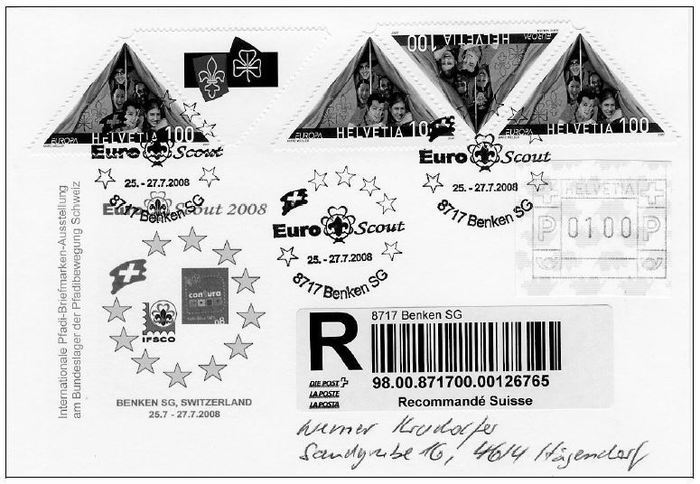 The exchange meetings in the restaurant Rössli were well attended. There was a lively exchange of ideas, enthusiastic discussion and information exchange or simply chatting with friends. The excursion for ladies and partners on Saturday led with the car via Wäggital, the winding Sattelegg to Lake Sihl and to Einsiedeln, where the world-famous monastery with its library and the imposing baroque monastery church were visited. More than 70 people took part in the banquet with partners from Saturday evening at the Hotel Schwert in Weesen am Walensee. The aperitif was served on the terrace before the thunderstorm set in. The evening with the four-course menu was surrounded by classical music. 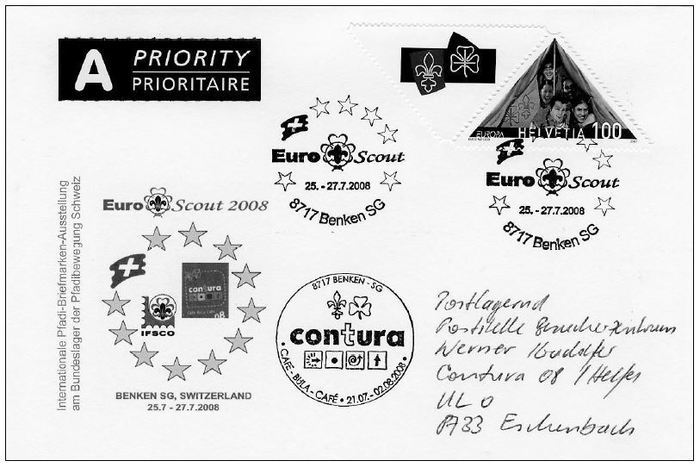 Different cancellations on the same document are not permitted, e. g. the stamps of EuroScout and Bundeslager. However, there is an exception to this rule: if a letter is sent' poste restante', it will be affixed to the back of the stamp of the office of arrival, this is not possible on the back, on the front. The illustration shows a voucher that was sent from EuroScout to the Federal Camp' Postlagernd' in the post office of the Visitor Centre, where it was stamped with the' contura' special postmark.