www.pfadfinder-briefmarken.ch / 4: Newsletter > Review of 100 years of Pfadi in Zurich - Exhibition at the Stadthaus Zürich
.

The exhibition was opened by the Mayor Corine Mauch and the President of the Association Dr. Helmut Meyer, followed by a brief presentation by the Zoo Director Dr. Alex Rübel and the curators Marion Elmer, Pascal Pauli and Magdalena Rühl. The exhibition was organized on the occasion of the anniversary by the association Pfadiausstellung Zürich in cooperation with the Department of Culture. 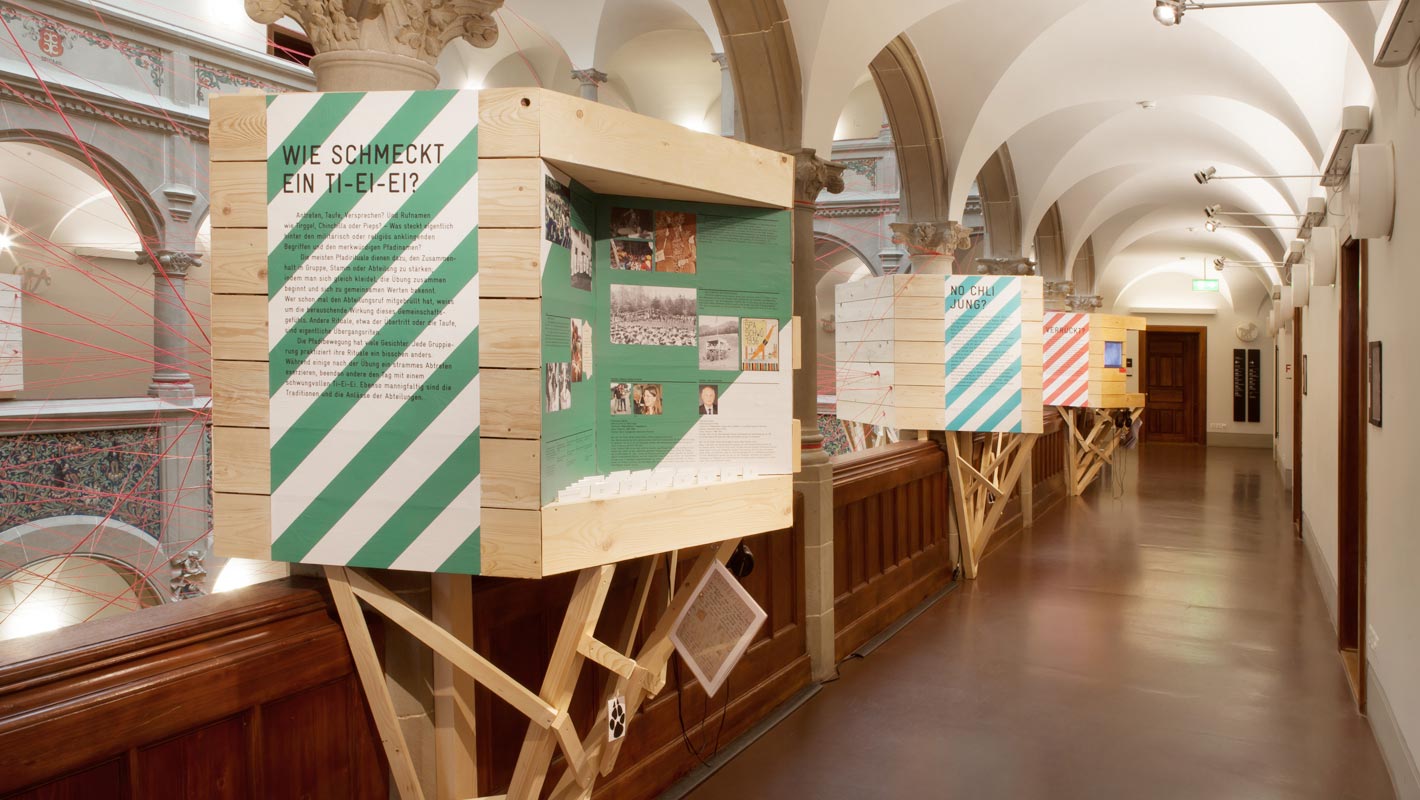 A varied accompanying programme complemented the exhibition with discussion rounds, lectures and guided tours. Due to the great success of the visitors, the exhibition duration was extended by two months until 20 October 2012.

The Pfadi has existed in the city of Zurich for a hundred years. Given the fact that a pathic career lasts five to ten years, rarely fifteen years, this is a long time and is an astonishing constancy. Today's scouts live in very different conditions than the scouts a hundred years ago. Accordingly, the pathi movement has changed and will have to change further in order to remain a contemporary youth organization. However, she has remained true to her principles: Young people are led by young people and encouraged to find their own way and carry responsibility.

The exhibition "100 years of Pfadi in Zurich" showed how the Pathi Movement was founded in Zurich, developed and is still standing today. It documents the peculiarities of the Pfadi in comparison to other youth organizations. It showed why for many Zurichers, membership of the Pfadi is an important element in their biography. However, it also refers to the challenges confronting the Pathi in the present.

In Switzerland, the pathi movement initially developed in cities. Already in 1912 the first path groups were formed in Zurich. The exhibition shows the pathi operation in Zurich in the past and present. The pathological sections of the 21st century with their self-image and activities are presented. Why do the young people of Zurich participate in the Pfadi - or not? And why does the Pathi movement find it so difficult to reach children with a migration background?

What is Pfadi good for? It does not produce top footballers, does not educate children and young people to be religious Catholics or Protestants, does not recruit junior party members and does not provide junior players for gymnastics clubs. So what's the point of the pathological movement if it doesn't serve any purpose

Sports club, no religion, no party, no ideology serves? The exhibition explores these questions in depth: it deals with the fundamentals and methodology of the Pathi. Methods such as "personal progress" and "boy lead boy" have been successfully practiced for over 100 years: What for an 8-year-old "wolf" starts to stack up the wood for a fire properly may end a few years later in the organisation of a two-week camp for several dozen children and young people. In this way it is made clear that the pathi ultimately serves the personal development of the individual for the benefit of the entire society.

Women in the Pathi

Today, it goes without saying that girls and young women are active in associations and assume leadership functions. But when the first girls' radio stations were founded in Zurich almost 100 years ago, this was by no means the case. In this part of the exhibition we ask female pathologists of past decades why they became leaders, what problems they had to struggle with and what fascinated them about the pathi idea. But we also let today's pathologists have their say: Which tasks do they perform in pure girls' departments and which in mixed departments and how do they experience the differences? 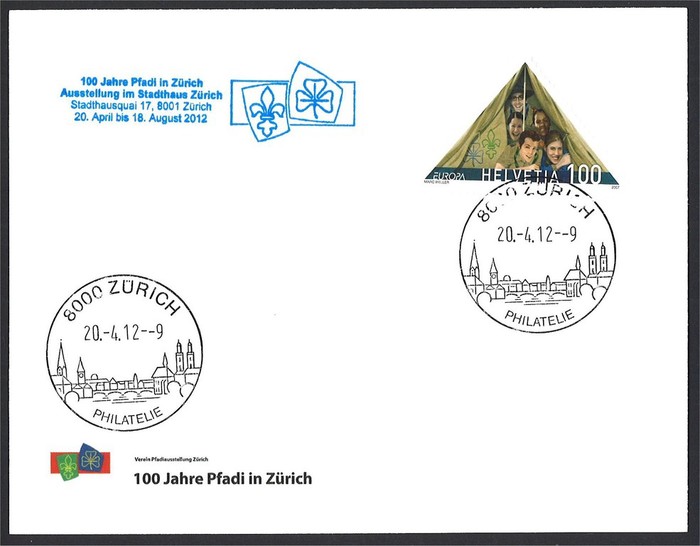 Back side: Coloured postcard for the exhibition "100 years of Pathi in Zurich".
Exhibition at the Stadthaus Zürich - on the occasion of the opening of the exhibition.

They carry strange names, have their own laws, which they swear to follow all their life long at meetings in dark woods, practice strange rituals, drink obscure potions, chant calls in strange languages and conduct seemingly senseless tests of courage. Yes, for outsiders this pathi is often an incomprehensible, if not uncanny, society! It is high time to bring light into the darkness of these rituals and traditions. Not all path rituals can be explained down to the last detail, but they have taken on their own meaning and importance over the last 100 years. This part of the exhibition offers non-Pfadis an insight into the not always easy to understand world of scouts, but also critically questions traditions. 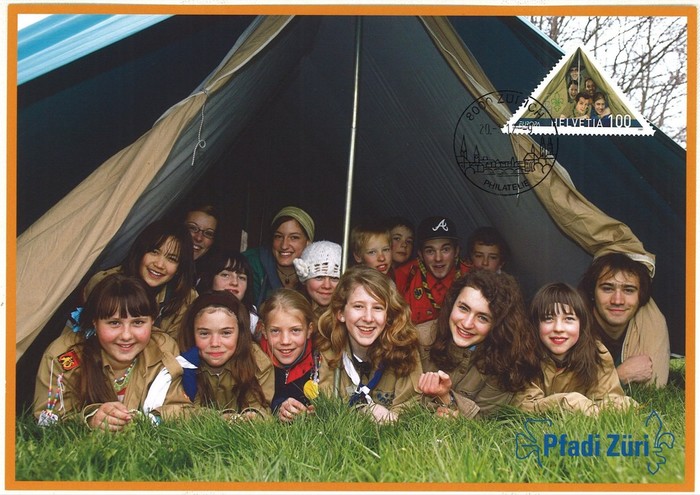 Coloured postcard of the "Pfadi Züri", with special stamp Europa Cept from 2007

Once a pathi - always a pathi

It was the former Zurich city councillors Esther Maurer, Monika Weber and Thomas Wagner, as well as historian Peter Stadler and Zurich's zoo director Alex Rübel. Politicians, business leaders, musicians, actors, TV presenters and even official beauty queens - Pfadi obviously connects beyond all party boundaries and professions. And many a good business idea has arisen in the circle of pathi friendships. In this part of the exhibition, former scouts tell us what memories they associate with their time as scouts and how their network of paths and their experiences still have an impact today.

The prejudice that the Pathi is military is persistent. When you think of Pfadi, uniforms, military pools and joining or leaving come to mind automatically. But how military was and is the Pfadi really? In this part of the exhibition we show that the experiences of the professional military and path founder Lord Baden-Powell have influenced his scout concept. But we also make it clear that much of what appears military at first glance has a deeper meaning. Thus, for example, the Pathi uniform always served the purpose of making the social differences of the members fade into the background - an idea that is perhaps more topical than we think.

Exhibition venue Lichthof and Gallery in the Stadthaus Zürich

The exhibition was not only aimed at former scouts ("weisch no?"), but also at the current active path generation, school classes and other interested parties. Because it bridges the gap between the past and active path life, the exhibition also had a lasting effect and served not only as a reminder of past adventures. As with a nature trail exercise, the organisers also took into account the location's circumstances when organising the path exhibition in the town house. In the town house it is the architectural space, the imposing atrium that gives the exhibition space to spin the path thoughts. The exhibition designers stretched ropes and cords, combined given points and condensed gaps into thematic focal points. Floating freely in the atrium, the result was an unmistakable sign that pointed to the exhibition.

All ropes and cords formed a network that pointed to time spent together and paths travelled together, to structures, perseverance, endurance, lust and joy, to connections, contacts, intersecting paths and encounters. In contrast to virtual networking, which shapes our everyday life, the designers created a real network based on human energy. Tensioning and spinning ropes, letting a little craziness take over in everyday life and passing it on - just as the scouts have been living it for 100 years...

In the gallery on the 2nd floor there were also "tree houses" with a view of the atrium. Here, the large network was consolidated into nodes around selected topics, on the basis of which the 100-year history of the Pathi in Zurich was deepened and explained. The "tree houses" functioned as peep-boxes and showcases and were equipped with information of all kinds, be it texts, pictures, objects, listening stations or videos.

Impressions of Lichthof and Gallery in the Stadthaus Zurich 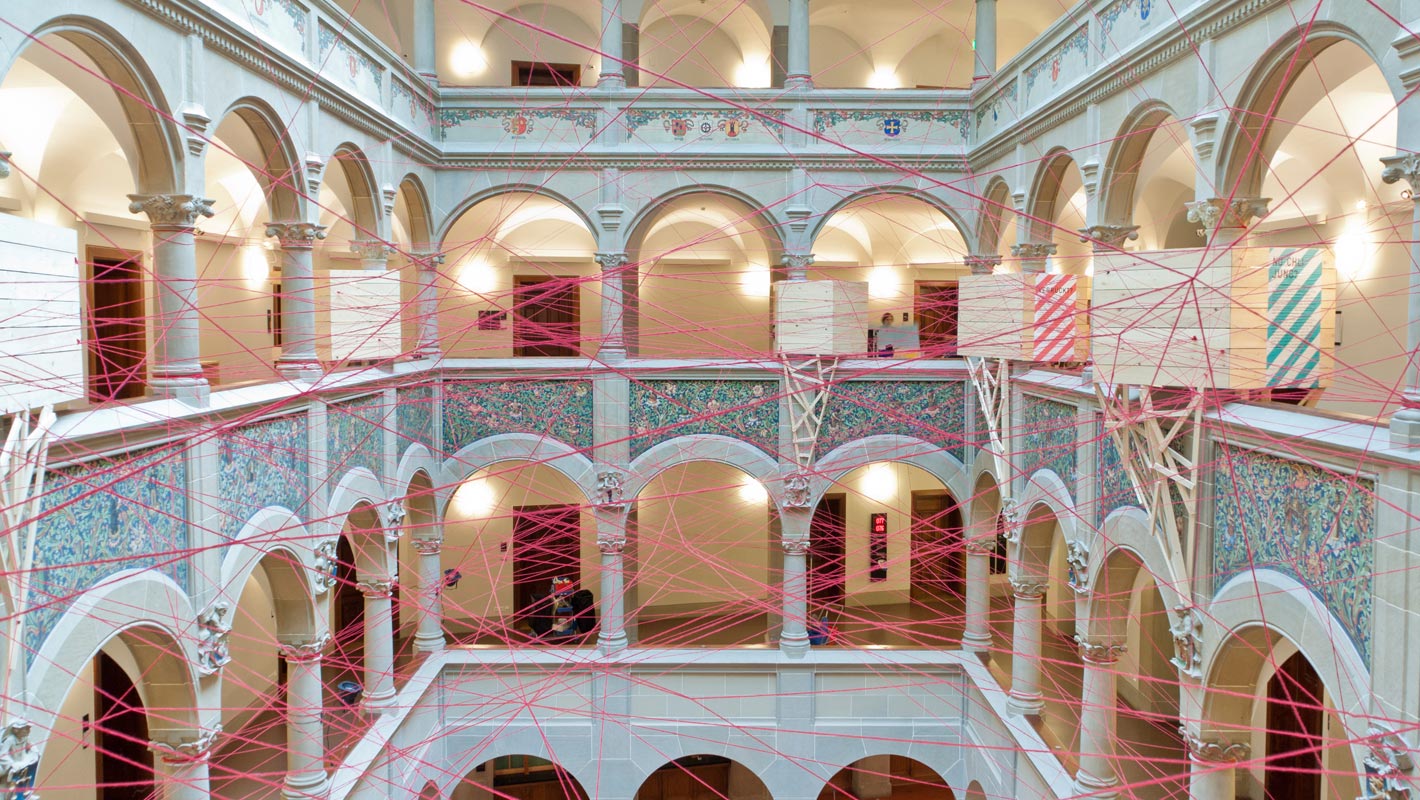