Swiss Post has so far issued three Scout stamps, all in connection with anniversaries. This article is a supplement to the article in newsletter No. 4/88:

From the 5-Rp. In the meantime, several other versions of the brand name have become known, some of which are only visible with a magnifying glass.
The third path mark appeared in 2007.

1.50 years of the Swiss Scout Federation

Three years after the Boy Scout Camp on Brownsea Island, led by Baden-Powell, in 1910, a "Boy Scout Association Pro Patria" was founded in Basel, but it soon returned.

In 1910, the idea of scoutism began to take root in the then existing "Youth Club" in Geneva, and a year later the "scout method" found its way into the youth organization of the Christian Association of Young Men (CVJM). In 1912, the leaders of the "Unions cadettes de la Suisse romande" (cadets' association) in Neuchâtel laid the foundations of Swiss scouting. German-speaking groups from all over Switzerland joined this new movement next year.

The Swiss Scout Association was founded on 5 October 1913. This was a complete success and so in 1963 the anniversary was celebrated with the issue of an advertising stamp. The value of CHF 0.05 was published on 21 March 1963 in a six-value version comprising Series.

Some insignificant variations and printing coincidences are known from this brand. 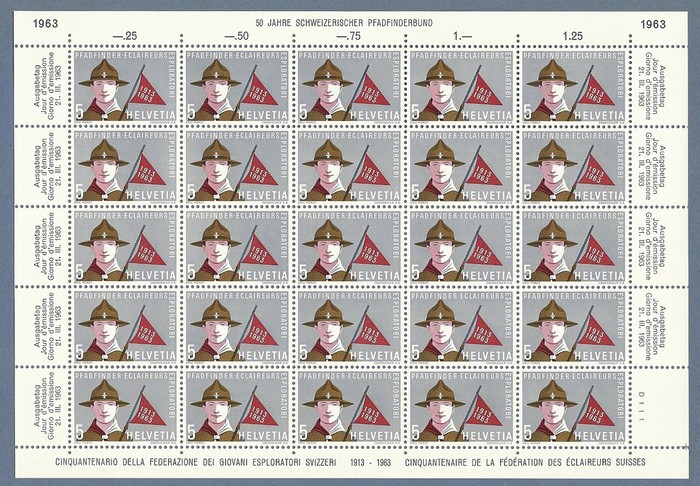 Sheet of 25 stamps, sheet D, the sheet number is next to the lowest stamp on the right. 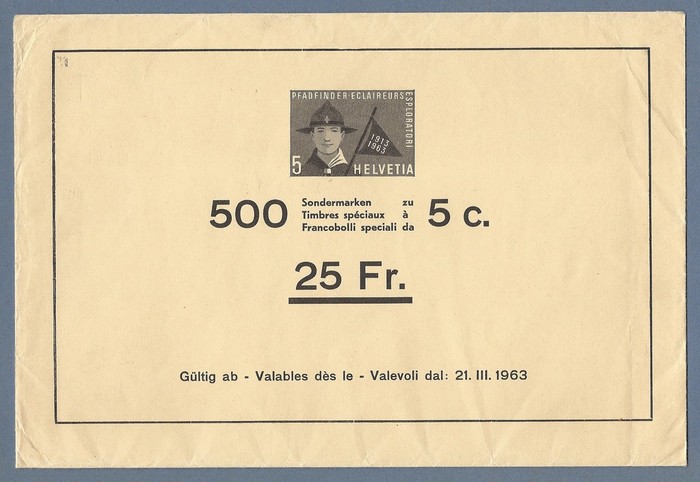 The following versions of this brand are still known today (numbers according to Zumstein special catalogue):

395.2.01 coloured dots or dashes, small defects of etching, e. g. warts on the chin (sheet C111 3rd mark); red dot on the number 5; grey dot on the 1st mark; red dot on the left. F by boy scouts; white dot under the chin; white horizontal strokes of more or less strength; red, fine strokes (sheet A111 13. mark, horizontal from ear to flag, sheet A111 17. mark, vertical under left edge of hat); light spot to the left of left eye.
395.2.02 Lightening vertical left from the edge of the hat up to the number 5

2.50 years of girl scouts in Switzerland

After the scouts, the subsequently founded Girl Scout Troops were also successful throughout Switzerland, but there was still no coherence among themselves. On the initiative of Mrs J. Paschoud, a first meeting was convened in Lausanne in 1917, which led to the founding of the Confederation of Swiss Girl Scouts on 4 October 1919.

To mark the 50th anniversary of this alliance, an advertising brand was also launched. The value of Fr. -. 10 appeared on 13 February 1969 in a series of five values. 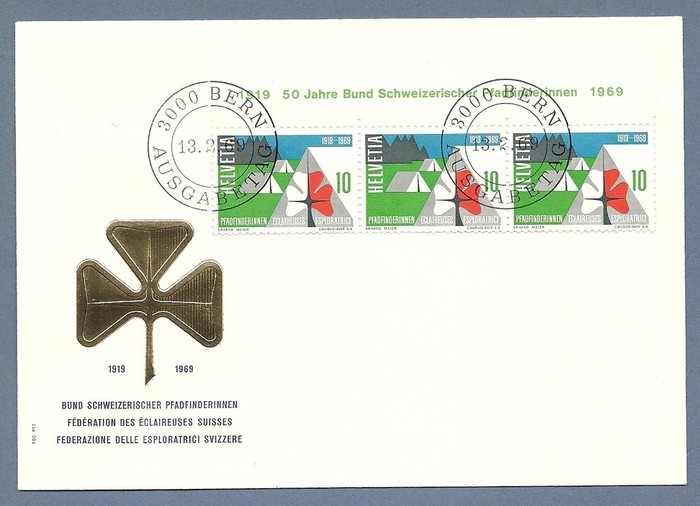 First day cover with 3 path stamps and inscription in the margin of the sheet, postage correct, inland letter up to 250g,
official envelope of the post office. 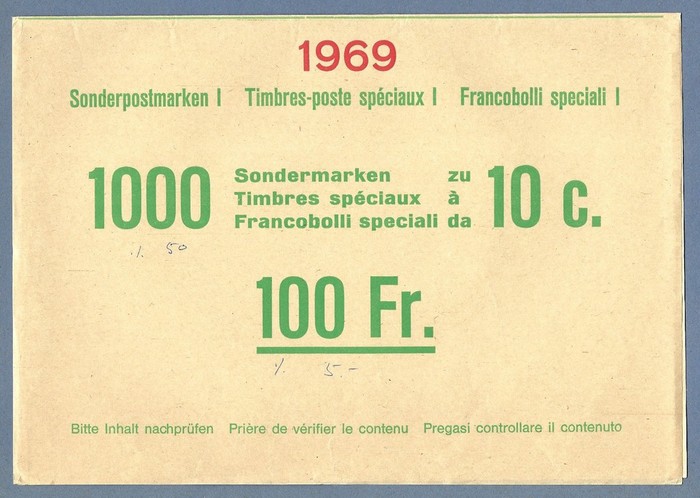 Insert sheet of a "pli"; 20 sheets of 50 stamps each were packed in a plastic sleeve.

Of this mark, only a few print randomities are known, e. g. small white dot.

Lord Baden Powell (1857-1941), the founder of the scout movement, was colonel of the English army and defended the besieged town of Mafeking (South Africa) against the Boers for 217 days. During this time he used boys for messenger services and as scouts. This was the impetus for him to develop an education programme for young people. To test this in practice, he conducted a camp on Brownsea Island in 1907 with 26 boys. This event is considered to be the foundation of the scout movement, which spread all over the world.

As part of the joint Euro-CEPT editions, Swiss Post decided on 10 May 2007 to publish only a value of CHF 1.00 on the occasion of its anniversary.

No versions of this brand are known to date 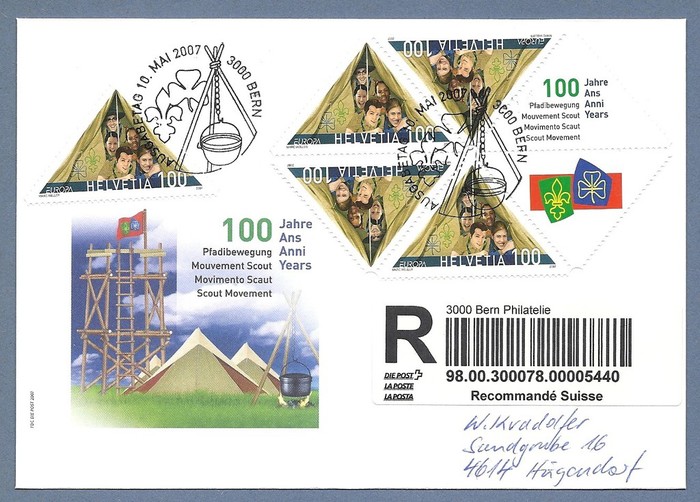 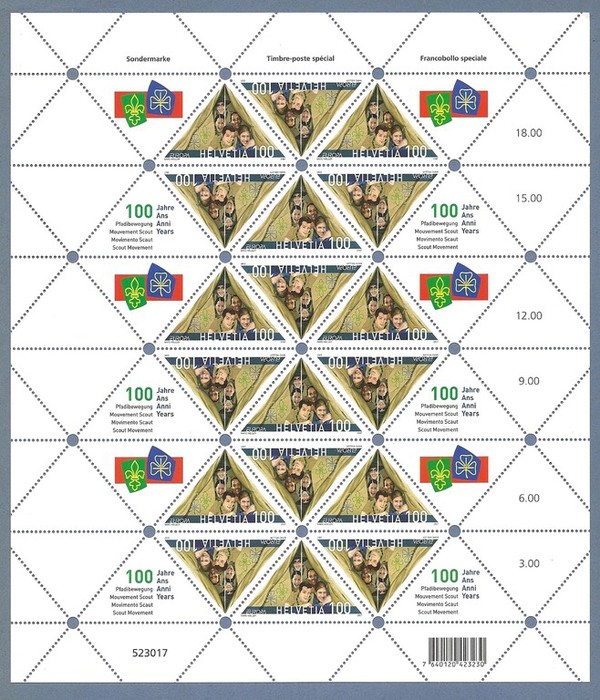 Sheet of the 2007 path mark with 18 stamps and printed fields instead of printed margins.
From this, different se-tenants could be printed together, see also in the stamp catalogues