Uli Hänny was born in St. Gallen in 1912. As the son of an architect, he lived in St. Gallen until 1944 and then, until his death in 1984, mainly in Basel. In St. Gallen, he went through elementary school and the cantonal school (grammar school), became a scout, then went on to become a rover in the Hospice of St. Gallen department. 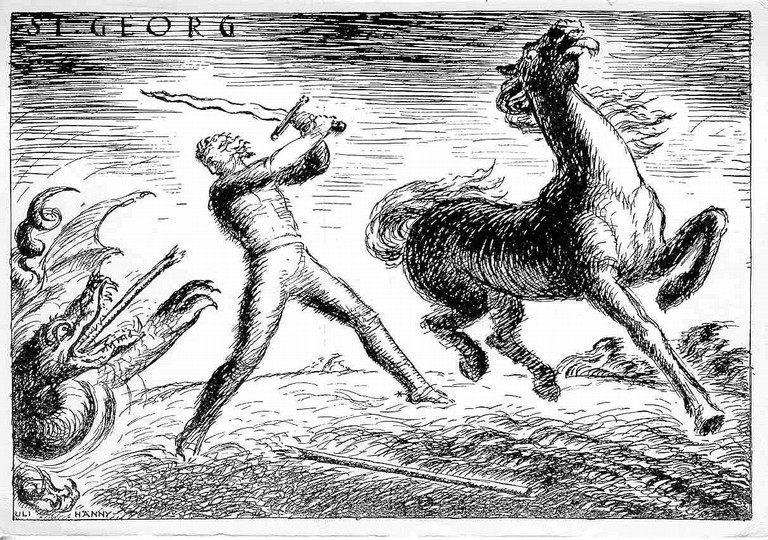 In November 1926, at the age of 14, he was suddenly infected with polio. After a lecture, he had to get sick to bed. The doctor found bronchitis. Soon he was unable to move both his arms and legs. He wasn't in pain. After five weeks, the left lung stopped moving. The doctor feared that the right lung would also be affected. At the same time, Father Rotach also prayed for Uli's life with the scouts. Uli was able to overcome the crisis.

In the summer of 1932 Uli Hänny graduated from the Realgymnasium. He once wrote:"The school-leaving examination made an extraordinary effort on me, and I didn't know what I wanted. I gave up my intention to become an architect for technical reasons because I couldn't keep the ruler. So I decided to become a parish priest, and after the school-leaving examination I realised that this was also impossible, I could not bear the sight of misery.

Uli Hänny drew a series of six scout maps from 1930 to 1931, which were available at the publishing house Rovergruppe Hospiz St. Gallen. Another map, The Summit forward, was selected as the official map for the first international Rover Moot 1931 in Kandersteg.

From 1932 to 1940 he spent his apprenticeship in Zurich, Paris, Basel and Berlin. Many of his drawings have been published in magazines. He did the illustrations for the evangelical youth Bible of the canton of St. Gallen. He created stained glass windows in the churches of St. Margrethen, Heiden, Eichberg, Eschlikon and in the church of Engelberg 1933-1942.

In 1944 he moved to Basel. His first designs for the Münster glass panes fall into the following period. Uli Hänny drew and painted until his death in 1984, leaving behind many thousands of sketch sheets, children's drawings and about 50 oil paintings from his various phases of life and countless paintings with religious themes. In 1989 and 1991 a number of paintings and drawings from his estate were shown in exhibitions in Basel. Uli Hänny was also a member of the Society of Swiss Painters, Sculptors and Architects GSMBA.

The text is taken from newsletter No. 4/92, magazine of the Swiss Scout Philatelic Society.