The federal camps in fast motion

As early as 1925, when there were scouts in many places only recently or not at all, the first federal camp took place in Berne. At that time, however, only the male scouts were able to participate, since in the past the scouts were organized in two national, gender-separated associations.

History of the Federal Camps 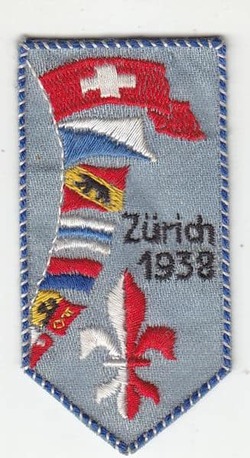 1925 - Bern (Bubenpfadi)
The first federal camp of the Swiss scouts. The wolf level also takes part. The entrance fee for visitors is 50 centimes. The camp site is open daily.

1932 - Geneva (Bubenpfadi)
The founder of the scout organisation, Robert Baden-Powell called Bi-Pi, arrives from England for a visit. In honour of the path founder, all camp participants defile past him.

1938 - Zurich (Bubenpfadi)
7'000 scouts pitch their tents on a clearing in Adlisberg. On 1 August, federal councillors and other celebrities will be visiting.

1948 - Trevano/Lugano (TI) (Bubenpfadi)
8'000 scouts participate under the motto "Boy Scout Youth - Happy Youth". For many boys this is the first trip with the Gotthard Railway.

1949 - Gotthard (UR) (Girl Path)
During the camp, the Association of Swiss Girl Scouts celebrates its 30th birthday. Federal Councillor Etter and Lady Baden-Powell, the widow of the pathway founder, visit the camp as guests of honour.

1957 - Goms (VS) (Girl Pathi)
International friendship camp for female scouts with 6'000 participants, 800 of them from abroad.

1966 - Domleschg (GR) (Bubenpfadi)
The BuLa-Express, a colourfully painted special train of the Rhaetian Railway, connects as a special attraction of the camp several times a day all subcamps between Ems and Thusis.

1980 - County of Gruyères (BE/FR/VD)
The first joint BuLa of scouts and scouts with 22'000 participants. A sudden storm and heavy rain brings disorder in two subcamps - the participants take it calmly.

1994 Bowl area (BE/LU)
Under the motto Cuntrast, a superlative scouts' camp takes place in 1994. Around 21'000 scouts, including 658 guests from abroad, pitch their tents in eleven subcamps around the Napf in the cantons of Berne and Lucerne.

2008 Lint-level (SG/SZ/GL)
The Federal Camp took place under the motto "Contura 08". 25'000 scouts from all over Switzerland were at home in eight different subcamps and the camp centre for two weeks in the Linth plain between Walensee and Obersee (Zurichsee).